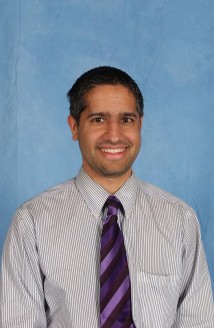 Dr. Ravi Menghani is a graduate of UCLA’s David Geffen School of Medicine and UCLA’s Anderson School of Management from UCLA’s prestigious MD/MBA combined program. He subsequently completed a 3-year surgical residency in ophthalmology at UC Irvine’s Gavin Herbert Eye Institute. During this time, he gained experience performing over several hundred intravitreal injections, glaucoma lasers, and retina lasers to treat diabetic retinopathy. In addition, he performed over 200 cataract, pterygium, and corneal transplant surgeries as primary surgeon. Dr. Menghani is also very experienced in the area of chalazion, stye, and hordeolum treatment and removal. Currently, Dr. Menghani is an ophthalmologist in private practice in Long Beach, focusing on cataract, pterygium, and vision-correcting surgery and has affiliations with several hospitals in the Long Beach and Greater Los Angeles areas.

Dr. Menghani has been published in widely-read ophthalmology journals on the subject of thyroid related orbitopathy (Graves’ disease). He counts Dr. Robert Goldberg and Dr. Raymond Douglas as influential mentors. Dr. Menghani has experience with multi-focal and toric astigmatism-correcting intraocular lenses as well as monofocal lens implants. Dr. Menghani serves as a member of the American Academy of Ophthalmology, theAcademy of Cataract and Refractive Surgery, the California Medical Association, and the American Medical Association.

A dedicated Angeleno, Dr. Menghani performed his undergraduate studies at UCLA on Regents’ and Alumni Scholarships. He graduated with Phi Beta Kappa Honors and received the Golden Key International Outstanding Alumni Award. In addition, he was one of 3 individuals amongst the University Community to be awarded the Charles E. Young Humanitarian Award for his outstanding service to the community.

He has been featured on CBS News as well as in Billboard Magazine for his achievements. Dr. Menghani is a sought after speaker and has delivered seminars on the topic of non-profit work. In addition he has served as the keynote speaker at several award induction ceremonies, such as the Golden Key International Honour Society and the National Society of Collegiate Scholars.

He finished an internship in Internal Medicine in 2010 at the St. Mary Medical Center in Long Beach where he was awarded “Intern of the Year” by the faculty. He then completed his Ophthalmology residency at UC Irvine’s Gavin Herbert Eye Institute, where he spent time at the UCI Medical Center and the Long Beach Veterans Memorial Hospital.

Dr. Menghani has also been very active in the world of charity. He is one of the Co-Founders of Project Nicaragua and now serves as Executive Director for National Project Nicaragua – a 5-chapter university-based volunteer medical relief effort to aid impoverished Nicaraguans. In addition, Dr. Menghani has co-Founded Project RISHI (Rural India Social and Health Improvement), a not-for-profit organization dedicated to helping impoverished villages in rural India. Project RISHI has grown to include several hundred members and is active in many of the local communities.

Dr. Menghani lives with his wife, Sheila, an Emergency Medicine physician, and his two sons. He enjoys Indian, Mexican, Italian food, and sushi, and is an active food critic in various social media outlets. He is an avid fan of collegiate and professional athletics and loves bicycling. He speaks fluent English and Spanish and considers treating every patient like family a priority.